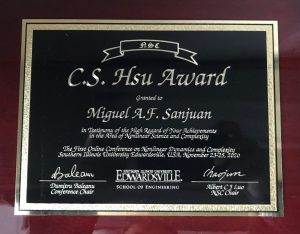 Professor Miguel A.F. Sanjuán has made pioneering contributions to the understanding of fractal structures in Nonlinear Dynamics. In his pioneering work (Phys. Rev. E 64, 066208, 2001) it was proved for the first time that the Hénon-Heiles system possesses the interesting topological property of Wada. This implies a special case of fractal boundaries, the Wada basin boundaries, with very strong consequences for its predictability. He has co-authored two relevant review papers on the topic: “Fractal Structures in Nonlinear Dynamics” (Rev. Mod. Phys. 81, 333-386, 2009) and “New Developments in Classical Chaotic Scattering” (Rep. Prog. Phys. 76, 016001, 2013). Quite recently he has contributed to the seminal idea of Basin Entropy as a quantitative tool to measure the unpredictability of dynamical systems, and to provide three new numerical methods to test for Wada basins.

He has contributed to develop a particular method of chaos control, which is called “partial control” in collaboration with Prof. James Yorke (“Dynamics of Partial Control”. Chaos 22, 047507, 2012). The method is applied in situations where there is transient chaos in presence of noise, and the striking idea is that the system can be controlled with a control smaller than noise. The method has been applied so far to numerous dynamical systems, and to problems ranging from ecology to dynamics of cancer.

He has also made seminal contributions to vibrational resonance and nonlinear resonances. His monograph on “Nonlinear Resonances” co-authored with Prof. Rajasekar is having a fundamental impact in the development of the field, with applications in numerous different fields.

He has made several significant contributions to the modeling of biological systems, including the analysis of map-based models in neuronal dynamics (Physics Reports 501(1-2), 1-74, 2011), and has pioneered a new research line on physics and dynamics of cancer.

Other of his contributions focus on applications of nonlinear and chaotic dynamics in Physics, Galactic Dynamics, Chaos and Entanglement, Cold Atoms, and Black Holes. A second edition of the book “Predictability of Chaotic Dynamics” co-authored with J.C. Vallejo has recently appeared. Furthermore, he has strongly contributed to the education of new researchers in the field, by mentoring more than 20 PhD Students, and establishing many international collaborations with 100+ different co-authors of 20+ different nationalities. He has led a research group in NLD, served in many editorial boards on NLD, and created university master programs to teach NLD.