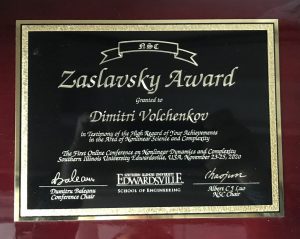 Professor Dimitri Volchenkov developed the novel breakthrough approach to studying the stochastic counterparts of nonlinear dynamical systems, in which deterministic trajectories are replaced by random trial trajectories of some well-defined stochastic processes. The non-perturbative techniques of Quantum Field Theory (such as renormalization group and instantons) have been redeveloped for obtaining asymptotic solutions in the problems of stochastic non-linear dynamics.

He developed a comprehensive descriptive approach to mesoscopic complex systems, time series, hypergraphs and graphs, scale dependent random walks based on the modern information theory. The paradigmatic mathematical problem of data analysis, aggregation of individual cases/events/states in a separable metric (Polish) space into the probability distributions and lifting an empirical metric to another metric defined on distributions rather than on the events (known as the Monge-Kantorovich problem) have been resolved on graphs.

He developed a breakthrough approach to modeling subsistence and survival in precarious environments; evolutionary and socio-economic models in different ecologies that would mark their inhabitants via cues to the ’faster’ versus ’slower’ behavioral strategies (the problems of HIV- and other decease prevention policy efficiency, adaptive management under uncertainty, etc.).