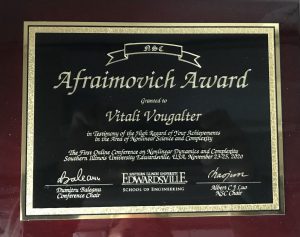 Professor Vitali Vougalter’s achievements in recents years are mostly related to the solvability of the equations, both linear and nonlinear which involve the non Fredholm operators.

In many scientific applications one can encounter an operator which essential spectrum contains the origin. Such operator has no bounded inverse, which is an obstacle in solving the elliptic problem. The general theory of the non Fredholm operators does not exist so far.

One class of equations he studied contains the Schrodinger operators without Fredholm property. Since the scalar potential involved in such operator is nonconstant, the standard Fourier transform is not of any help in solving the non homogeneous elliptic problem. As distinct from the previous works on the subject, together with V.Volpert and M.Efendiev they did not use the analysis in the weighted function spaces but applied the spectral and scattering theory of Schrodinger type operators to obtain the solvability conditions.

Another significant class of equations involving the non Fredholm operators is the integro-differential equations, which are very important due to their applications in the Mathematical Biology. The problems of this kind arise when there is a nonlocal consumption of resources and intra-specific competition. He proved the existence of stationary solutions in many examples of this kind via the fixed point technique using the solvability conditions for the non Fredholm operators in the unbounded domains. The studies of the existence of the stationary configurations are crucial for proving the existence of the biological species. It is also extremely important to investigate the solutions of the integro-differential equations since they describe the nonlocal interaction of neurons.